Our LGBTQ map of Cornwall currently shows a number of historical queer stories and now we  want to open this map up to community submissions!

We would like to collect stories from the Cornish LGBTQ community to document how Queer Cornwall looks today and throughout modern history. We would like to document past events, festivals, meetings, strikes, protests, night clubs – any stories that detail life in Cornwall as a queer person. From the first pride in Cornwall to the virtual pride of 2020, we want to hear your stories!

Documenting our experiences will ensure that these stories are not lost like many of the historical queer stories that came before us, and by sharing these stories we hope to stay connected the community and state proudly that: we’re here & we’re queer.

Send us a message

This project is supported by 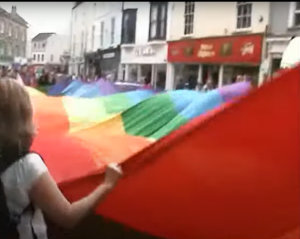 The first official Cornwall Pride was held in Truro in 2008. A group of evangelical Christians held a silent protest against the event and one stage a line of 50 protesters linked arms across the road and turned their backs on the approaching revellers. 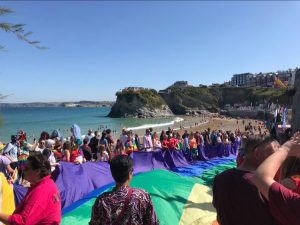 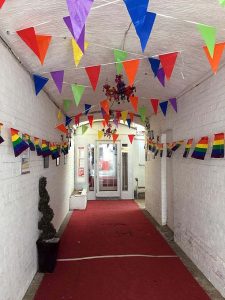 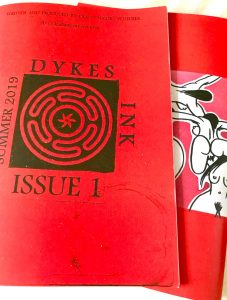 Dead Unicorn Ventures formed in 2018, an events organisation that formed as an alternative traditional prides. They also publish the zine ‘Dykes Ink’ 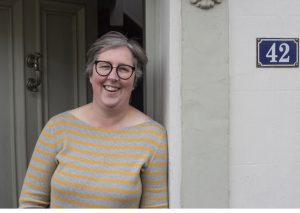 Louise has lived down here for four years and has always cared for her partner. During lockdown her partner went into the hospital.

“I mean ever since i’ve lived here for  4 years now, my partner has been ill so that time has really been framed by illness.

Once I got over the shock of not being able to see my partner, work went crazy

Ive really got to inhabit my own space, and enjoy my own living space. So that has been a delight. Think it’s a time that’s full of contrast.” 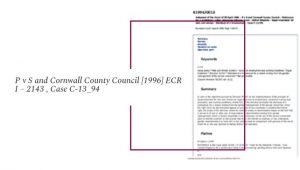 In 1996, there was a landmark trans rights case that happened right here in Cornwall, which extended workplace protections for ‘transsexuals’. The ruling stated that you couldn’t discriminate against people in the workplace based on gender identity and this was the first such ruling not only in this country, but internationally. 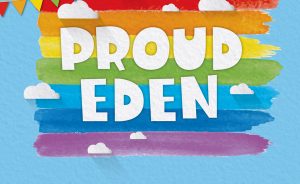 First started in 2017, the Eden Project hosts an event of all things LGBTQ with their ‘Proud Eden’ annual event. A celebration of LGBTQ+ culture, the event features queer poets, writers, singers and films. 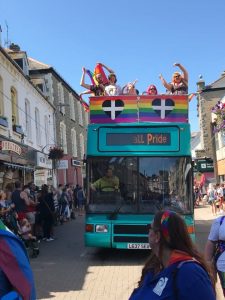 Running for over 10 years Rainbow Source Radio has become a staple of queer life in Cornwall every wednesday evening. 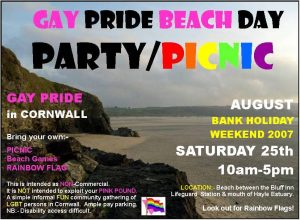 Saddle tramps in Carbis Bay was an LGBT friendly bar in business in the 1980s, where gay nights were held.

Sadly, Saddle Tramps was shut down after locals boycotted the venue. People on others nights would not use the same glasses which had been used by gay people or want to sit on the same seats because of AIDS 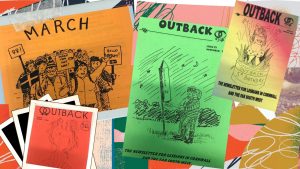 ‘Outback Newsletter for Lesbians in Cornwall and the South West’ was a community led publication that was set up in 1997 and ran until 2008. 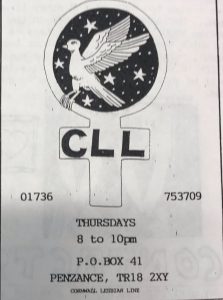 Cornwall Lesbian Line was a support line which ran on Thursday evenings between 8pm-10pm. The line was set up in 1989 to help lesbians in Cornwall with rural isolation, emotional support, welfare advice and acted as a social network sharing event details.

Sunday night at the Arts Club in Penzance was a mixed LGBT night-club that became a staple venue for the community in the 90’s/00’s. As this sketch shows (found in Outback Newsletter) the Arts Club was an excellent social place where couples found each other 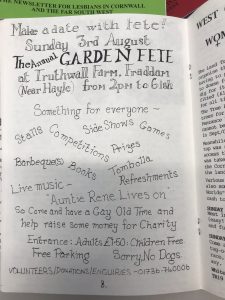 Prior to Cornwall Pride being established in Cornwall in 2008, word-of-mouth events were put on, such as the annual LGBT Garden Fete- we can tell from Outback Newsletters that they were around in the 90’s and early 00’s. 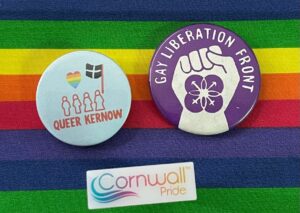 Wearing a badge is a simple, but powerful, signifier for coming out and being seen. The community created through the take up of uniform badges helped early activists create unity within the disparate sections of the LGBTQ+ community.

Badges are still popular today with activists, organisations and protests. Cornwall Pride have their own badge, as do we, here at Queer Kernow