This project is supported by

Send us a message 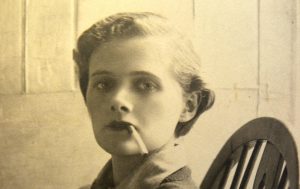 Du Maurier is a well-known novelist who lived and wrote in Cornwall. Perhaps less well known about her is the authors same-sex desire.

The BBC2 drama ‘Daphne’ explores Du Mauriers sexuality, which is an excellent and unapologetic look at De Maurier’s same-sex relationships when it is still apropos to gloss over, edit and censor queer relationships of famous figures not generally associated with the LGBTQ community. 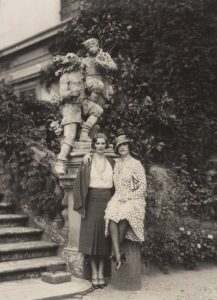 Socialite and author Violet Trefusis is most remembered in the extensive written accounts about her long-standing affair with Vita Sackville-West. The couple spent much time in Cornwall as Violet was the wife of Robert Trefusis, of the well-known Trefusis family of Cornwall.

Violet was the inspirations for many of Nancy Mitford and Virginia Woolf, and her affair with Sackville West has been immortalised on film in ‘Portrait of a Marriage’ 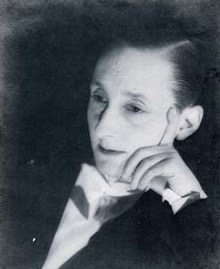 Constructivist artist Marlow Moss saw Cornwall as a sort of sanctuary, it was here where Moss embraced their new identity discarding the name ‘Marjorie Jewel’ for Marlow, and embracing their desire to subvert gender norms.

Moss, much like Gluck, also refrained from using a prefix and was even mistaken for a man in newspaper reviews of their exhibitions. It was after this transformation that Moss fell in love with novelist Netty Nijoff and their relationship spanned over two decades.

Moss returned to Cornwall, due to the threat of Nazism on the continent and ended up staying in Lamorna until their death in 1958.

Part of the Lamorna Art Group 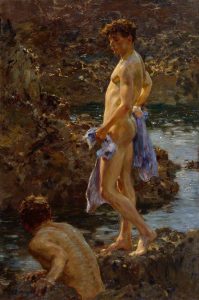 British painter Henry Scott Tuke is a well known artist in Cornwall and part of the Newlyn Art Group. But an aspect of Tuke’s work that is often neglected from interpretation is the queer coding through his artwork and the subsequent importance of Tuke’s art to the LGBTQ community.

Tuke’s work can be found in many galleries around Cornwall, Falmouth Art Gallery holds the Henry Scott Tuke Collection. 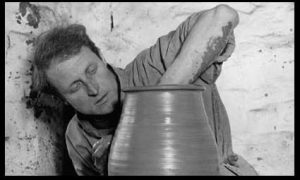 Potter Michael Cardews the first apprentice at Leach Pottery St Ives and later set up a pottery in Cornwall. He had many male relationships in his life as well as being a husband and father, ‘a man of paradoxes’, as detailed in his biography by Tanya Harrod. 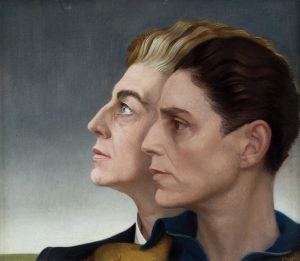 They famously asked people to refer to them as ‘Gluck, no prefix, no suffix, no quotes’.

Arguably one of Glucks most famous paintings (see above) is of herself and her lover Nesta Obermer in a radical depiction of same-sex partnership.
‘My darling own wife,’ Gluck once wrote to Obermer, ‘my divine sweetheart, my love, my life. I made straight for the studio and tried to be busy and have more or less succeeded, except that everything seems so utterly unimportant that isn’t us or connected with us’.

Part of the Lamorna Art Group 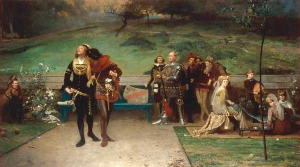 Piers Gaveston 1st Earl of Cornwall (c.1284 – 1312)
Edward II gave the earldom of Cornwall, including Launceston Castle to his favourite Piers Gaveston. Medieval Chroniclers hinted that the two were lovers and his favour for Gaveston caused much strife in the politics of the day, leading to Gaveston’s beheading in 1312.

This speculation was reinforced by Christopher

Marlowe’s late 16th century play Edward II, and other subsequent depictions of the pair in fiction.

Modern historians have been divided over the subject. Some argue that the evidence for a same-sex relationship is indisputable, while others claim that Gaveston and the King were adoptive brothers. 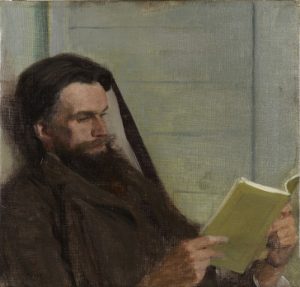 This portrait of sexologist Henry Havelock Ellis is an informal portrait of the man sitting in a deckchair in Henry Bishop’s St Ives studio. There is some evidence that Bishop experienced same-sex desire, and was a lifelong friend of the open-minded Ellis.

Ellis work in the field of sexology defined queer identities and sexualities in the late 1800s, it was considered radical enough that the bookseller George Bedborough was prosecuted for distributing Ellis’ writings. 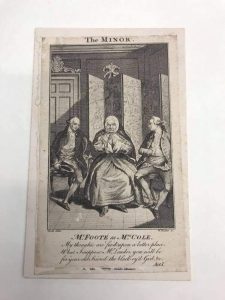 Truro Born Georgian Comedian Samuel Foote, was a famous and influential comic on the London stage. He was well known for his mimicry of contemporary individuals and his propensity for appearing in drag. Accusations of sodomy, which was a criminal offence at the time, led to the downfall of his career.

The Courtney Library at the Royal Institution of Cornwall in Truro holds a number of Foote related documents, from engravings to playbills. 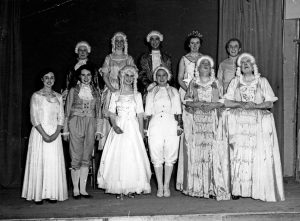 The Pantomime Dame is considered a cornerstone of British theatre culture. Within the history of the theatre, men dressing as women was not considered a comment on sexuality but as a necessity owing to the fact that women weren’t allowed on stage.

What is an interesting juxtaposition is the close alignment of dames and drag. Both pantomime dames and drag performers are male entertainers dressed as a woman – and yet one was accepted by society as far back as the 1600s and the other faced decriminalisation and criminalisation.

Nevertheless the art of cross-dressing is a subversive act that rebels against societal norms and pantomime dames are early evidence for people publicly pushing the boundaries of gender. In Cornwall, Penlee House has a fantastic collection of early photography that show the art of the pantomime dame throughout the decades. 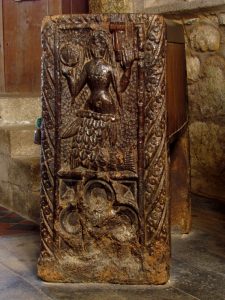 Mermaids have become a powerful symbol for the LGBTQ community and specifically for transgender people, so much so that the biggest trans charity in the UK is called Mermaids.

As a county with such a close relationship to the sea, oceanic folklore is a popular aspect of Cornish tales. No creature features more heavily than mermaids;  from the mermaid of Zennor to the Doom Bar mermaid of Padstow – mermaids are endemic in our folklore. But why are these mythological beings linked with queer naratives? Mermaids, unicorns, and indeed many magical folkloric beings can be seen in popular culture as embedded within the LGBTQ community.

The Mermaid of Zennor is popular within Cornish folklore, with the first tales written by folklorist William Bottrell in 1873, however the links of Zennor with mermaids dates well before that. In St. Senara’s Church in Zennor you can see a benchend dated to around 1400-1500 featuring a mermaid, demonstrating that these mythical creatures have been linked with the Cornish coast for hundreds of years.

A 3D copy of the Mermaid benchend is currently on display at the National Maritime Museum Cornwall in their ‘Monsters of the Deep’ exhibition.

On 15th June 1916, John Horace Whigham, a fair haired 22 year old who was college level educated and of independent means was visiting Falmouth. He happened to make the acquaintance of Duncan Davison, and the two were arrested for having sex.

The police charge was not for the public aspect of their sexual contact, but the fact it happened at all. Whigham and Davison were both tried and found guilty of buggery.

Unlike similar cases, as Whigham and Davison were both of a certain wealth they were given the option of escaping a jail sentence by agreeing to be committed to a mental asylum and pay a fine, £500 for Whigham and £1000 for Davison (roughly £43k and £86k today).

The court documents state that Whigham would be committed to “be prevented from contaminating other members of the community”, during this period homosexuality was regarded as a mental illness, one that can be ‘cured’.

This viewpoint took another 71 years to reverse, with the ‘Diagnostic and Statistical Manual of Mental Disorders’ did not remove homosexuality until 1978 and the World Health Organisation only removed homosexuality completely from it’s list of mental disorders in 1992. Furthermore it was only in 2018 that the Royal College of Psychiatry formally apologised for this.

However, despite this apology, conversion therapy is still legal in this country. 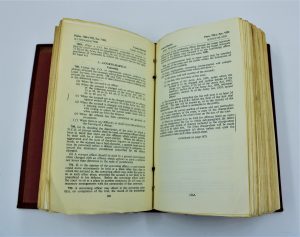 In July 1888 the assize courts of Bodmin heard the case of Sergeant Ernst Oke and Private William Davey who were in the same battalion 3rd B.D.C.L.I.(Duke of Cornwall Light Infantry). 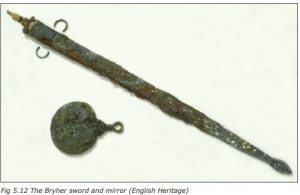 At Bryher on the Isles of Scilly, an Iron Age burial was found with grave goods featuring both a sword and a mirror. Traditionally, archaeologists would assume gender based on associated grave goods without conducting any skeletal analysis. This body buried with both a sword (previously thought to be masculine) and a mirror (previously thought to be feminine) is a particularly interesting find and goes to show that we shouldn’t impose our current cultural understanding and perception of gender binaries onto people from the past. We don’t know the details of Iron Age culture and should not assume that grave goods have a correlation with sex and/or gender. 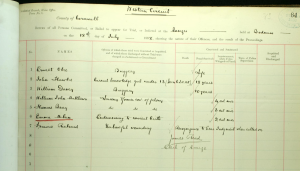 The court documents (Assize Records) from 1850-1920 held at Kresen Kernow offer a glimpse into an interesting period of LGBTQ+ history. This was the time when homosexuality was more in the public eye, thanks to the high profile trial of Oscar Wilde.

‘gross indecency with another man’ to ‘sodomy’ or ‘importuning’. Punishments ranged as social attitudes changed- from a death sentence, to prison sentence, mental institution to a fine.

With partial decriminalisation in 1967 and the Turing law in 2017, it is important to note here that this legacy of criminality is still not over. The Turing law did not overturn convictions for thousands of men charged with ‘importuning’ an outdated offence which was not eligible for a pardon. As many as 50,000 men were left out of this ‘pardon’ and given the bureaucratic and lengthy appeals process a little over 200 have been successful in having their antiquated and homophobic criminal record overturned. Read More…